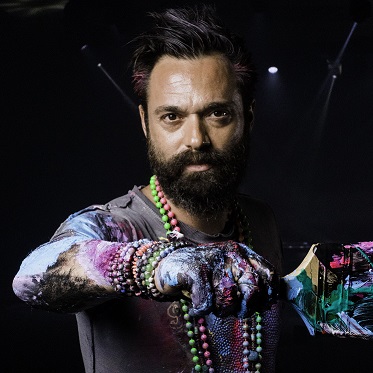 The Guinness World Record for: ‘The Largest Painting ever created on Canvas’ – Jafri’s 2020  Covid-19 Lock-Down creation ‘The Journey of Humanity’, at 18,000 square foot (the size of  two football pitches end-to-end, this masterpiece has now been described as: ‘A modern day Sistine Chapel created by one of the world’s greatest ever painters’.

The Guinness World Record for: ‘The Largest Social, Artistic, & Philanthropic Project in  History’ – Jafri’s ‘Humanity Inspired’, engaging just over 3billion people in this ground breaking initiative, (beating Face-Book’s Record) in connecting over a third of the world’s  population….!

Jafri’s ‘The Journey of Humanity’ then became the 2nd most expensive painting ever sold in  auction by a living artist, selling for a staggering $62million USDollars in March 2021. This puts Jafri in the Top-5 Artists of All-Time List.

2nd only to the 88year old David Hockney, who is twice Jafri’s age.

Jafri is the ‘First Artist in History’ to feature on the front cover of fourteen main-stream  Magazine Front Covers, in ten different counties, at the same time.

Youngest Artist in History to have an 18year Retrospective Museum-Based World Tour,  (younger even than Pablo Picasso), visiting 35x Cities in 28x Countries of the World.

With his prices set to soar over the next decade Jafri is described by CNN, BBC News,  Bloomberg, Forbes, and The Financial Times as: ‘One of the Art World’s Most Bankable  Investments.’